The Album Ya Lateef is not only a musical project for Majd al-Hamwi, but a lived experience. Majd al-Hamwi studied Fine Arts at the Damascus University before the revolution broke out. Ya Lateef is an  emotional archive for the past five years since the war began. Now, many Syrians are scattered throughout the world, Majd al-Hamwi finds himself using music and art as a tool for expressing what needs to be expressed and even if we don’t understand a language, music is a language, we all understand. 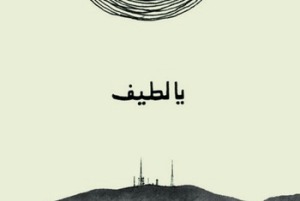 I think that the drastic changes facing our societies, are producing a drive for documentation in all ways possible.

He was born in 1989 and graduated from the Faculty of Fine Arts, Damascus in 2012. During his time at the University he started to become seriously interested in music but he did not like to have lessons and a teacher. He preferred to learn by himself and playing with friends. At this phase he had a lot of friends who were musicians too, and they started to form a band called Hawa Sharqi. It was a mix of oriental and western music. He is not interested in separating music genres, and adds that

“We were in a non-conscious way a product of this intermingling between different music directions.”

Although Ya Lateef was released in 2015, the songs were created mostly after the revolution except for one song, which was written in 2009. The songs were the result of a collaboration between Majd al-Hamwi and other musicians, but the lyrics were written by al-Hamwi. Songs like Raja’at al-Shams  is an acoustic song, with Fadi al-Hamwi, and Alaa Arsheed acompanying Majd al-Hamwi. Fadi al-Hamwi’s calm voice complements the violin of Arsheed and Majd al-Hamwi’s Bass Guitar and Keyboard.

“I was afraid the effort we had put in developing the songs would be in vain. But most importantly, for me, was not to lose the spirit of that period.”

Ya Lateef consists of six songs written between 2011 and 2014, narrating personal experiences and situations in the context of the Syrian revolution. His music is a way to document these experiences and to tell the story through this medium. 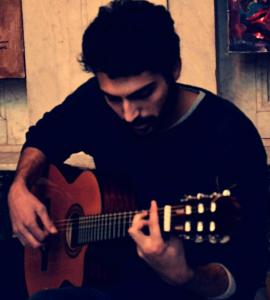 “After a long troublesome journey where the Syrian challenge themselves, authorities, borders and the forces of nature, the lucky ones arrive safely to refugee camps in European countries. Those camps are their first stop in the new world and their last sanctuary away from the Syrian war or the mistreatment and lack of opportunities in Syria’s neighboring countries. This first stop tells a lot about them, their journey, and what they can expect in their new refuge.”

His desire is “to combine art disciplines, such as movie making, writing, music and drawing.”. In addition to his own music, he works with different artists together, working on various projects helping him to address the current challenges he and others are facing. On the Project Syrian Eyes of The World he says:

“As a Syrian artist in a time of war, you are always expected to talk about the current situation of your country, but I would really love to sometimes make art just to talk about beautiful things other than war.”